Professional boxing ended year 2018 on a high in Nigeria when Monarch Promotions boss, Prince Stanley Williams was named Promoter of the Year by the World boxing Union (WBU).

President of the World Boxing Union (WBU) Thorsten Knille while decorating the the Monarch Promotions boss with the beautiful belt said “WBU has chosen you as our Promoter of the year for promoting six World Title bouts in 2018, no other Promoter achieved this feat, Congratulations.”

Monarch Promotions Boss Is WBU Promoter Of The Year

The award came as a huge surprise to Prince Williams, “This is a big surprise and I thank everyone at WBU for seeing me worthy of this Honour.” He said.

“Making champions before my Countrymen gives me pleasure and at Monarch, it is our constant pursuit to bring fight fans the most exciting fights”, Prince Williams added.

President of Nigeria Boxing Board of Control (NBB of C) Dr. Rafiu Ladipo thanked the WBU for bestowing such honour on a Nigerian Promoter. 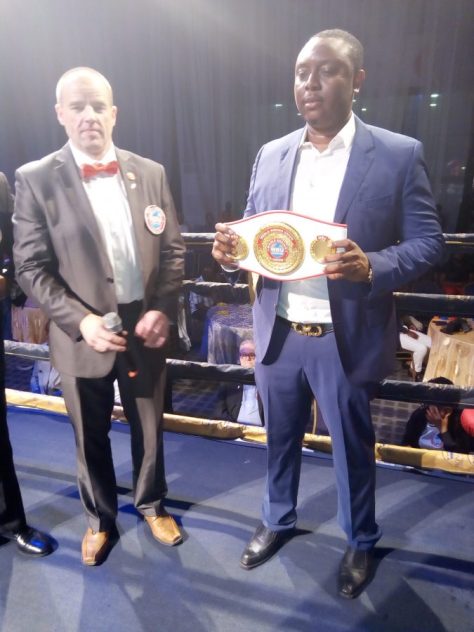 Monarch Promotions Boss Is WBU Promoter Of The Year

Prince Williams is clearly on a passion-filled mission to making Nigeria a true hub of the sport, rather than just a place that feeds boxing promotions in other parts of the world.

FG awards contracts for deployment of broadband infrastructure in ...

FIFA TO MAKE U-TURN ON ONE LOVE ARMBANDS